On April 20, Pacific Legal Foundation announced a federal lawsuit challenging Florida’s Hearing Aid Licensing rules. The case is Taylor v. Polhill and it pits Dan Taylor, a licensed hearing instrument specialist, against Florida’s Board of Hearing Aid Specialists and Board of Health.

Dan Taylor has spent nearly 30 years as a hearing aid specialist. However, as stated in a recent press release from his attorney, Taylor is “fed up with Florida’s costly and burdensome regulations on new, high tech hearing aids—which the federal government says are too severe—Dan gave up his state license and began adhering to federal rules, believing that federal rules invalidate Florida’s rules.”

According to his legal representative, Pacific Legal Foundation, Dan has never been disciplined or fined by the Florida Board of Hearing Aid Specialists because of a consumer complaint. Taylor operates a storefront practice in downtown Melbourne as well as a not-for-profit clinic, Mission Hearing, that helps reduce the cost of hearing aids for those in need. Taylor was an early proponent of the Sona hearing aid system, now dispensed under the Unitron brand as Flex.

Recently, Taylor allowed his Florida hearing aid dispensing license to lapse. He believes Florida’s unnecessary hearing aid regulations haven’t kept up with the times, that today’s advanced hearing aids don’t require traditional testing or equipment to be safe and effective. According to Taylor, Florida’s laws still require unnecessary tests that reduce access and increase cost for people affected with hearing loss, and create additional burden because they are in conflict with federal regulations intended to increase consumer access to hearing aids.

The lawsuit cites many several  components of the Florida hearing aid licensing law, written in the early 1980’s, that are believed to be antiquated and onerous, such as the provider must be physically present in the room at all times when interacting with a patient and $1700 in annual fees. Details of the lawsuit, filed on April 20, can be found here.

HHTM reached out to the International Hearing Society (IHS), but they had no comment on the case. An inquiry was also sent to the Florida Board and an update to this post will be provided when their comments are available.

April 24, 2018 Update: On April 24, the Deputy Press Secretary Brad Dalton responded to HHTM’s query regarding the case, “Thank you for reaching out to the Department of Health. As a policy the Department and Boards do not comment on pending lawsuits.”

May 2, 2018 Update: HHTM obtained the following legislative update announcement that was sent to members of the Florida Academy of Audiology: 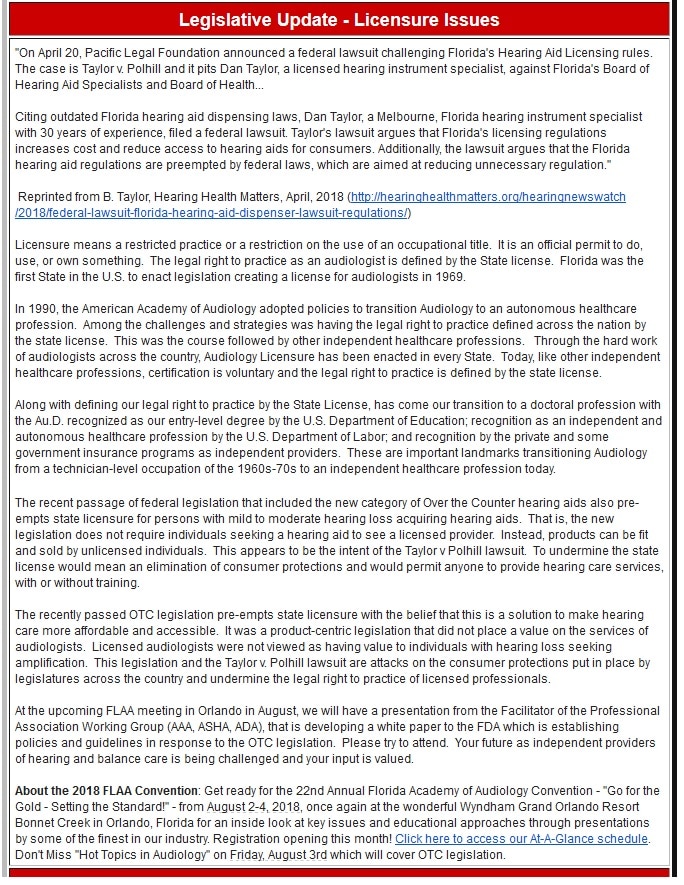