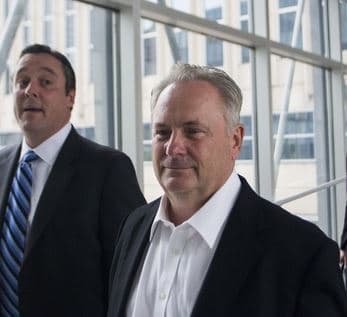 Federal prosecutors allege that, among other charges, Ruzicka “orchestrated a scheme” to steal more than $20 million from Starkey between 2006 and 2015.

Ruzicka has been accused of paying himself, Nelson and the COO of a Starkey subsidiary, Jeffrey Longtain, $15 million in restricted stock from a subsidiary company without Austin’s approval. Separately Ruzicka and two business associates, Lawrence Hagen (a former Starkey employee) and Jeffrey Taylor (the president of a hearing aid component manufacturer, Sonion) have been accused of setting up fake companies to receive consulting fees from Starkey totaling at least $600,000.

Ruzicka, Miller, Hagen and Taylor, via their attorneys, have denied all charges filed against them. Nelson, the former CFO, pleaded guilty on Dec. 19 to one charge of conspiracy, with the others heading to trial in the US district court of Minnesota.

Longtain is not a defendant in the current case, but he was charged with tax evasion in March 2017 and pleaded guilty in April.

The trial is on hiatus next week, due to Super Bowl festivities in Minneapolis. For a full account of Friday’s trial see Dee DePass’s account in the Minneapolis Star Tribune here.

On Tuesday January 24, it was the defense team’s turn to offer a much different version of events in the fraud trial of former Starkey president Jerry Ruzicka and three other fired executives. All four are accused of embezzling $20 million in stock and other bonuses, commissions from Starkey. They have pleaded not guilty in U.S. District Court in Minneapolis.

Prior to Tuesday, the prosecutors have produced hundreds of documents to prove that the defendants made the transactions without Starkey owner Bill Austin’s knowledge and then covered them up. However, on January 24th it was the defense attorneys turn to try and convince the jury that something completely different was happening. Defense attorneys told jurors that the government’s allegations about sham companies, faked commissions and millions in unauthorized bonuses and stock sales were false, because Austin knew and approved all financial transactions or gave Ruzicka permission to act accordingly.

Special Agent Brian Kinney showed jurors loads of e-mails in which the payroll reports ultimately sent to Bill Austin for review were allegedly altered by Ruzicka, Miller or Nelson. The altered reports either reduced or completely eliminated bonuses that were paid to the former executives between 2006 and 2015.

Prosecutors also pointed out to jurors how the bonuses on the reports sent to Austin year after year were dramatically under-reported and misrepresented what was actually on the company’s original payroll reports. The four defendants, who have pleaded not guilty, contend that Austin knew and approved of the financial transactions in question.

For a full recap of Monday’s trials, see the Star Tribune’s coverage.

Robert Duchscher, Starkey’s chief information technology officer, and another Storkey IT manager testified on Thursday, January 18 at trial of former Starkey executives. Both say they received the surprise of their careers’ in 2015 when they were ordered by CEO Bill Austin to search co-workers’ computers. Click here to learn details of the testimony.

On Wednesday, January 17, federal prosecutors began by laying the foundation for a case they describe as a “massive and long-running” fraud scheme, aimed at embezzling from the hearing aid manufacturer. Prosecutors argued that Ruzicka, abused his power by stealing from the company and its employees.

Ruzicka’s attorney countered during opening statements, saying that his client did not commit fraud and helped save the company from bankruptcy. After opening statements from the other three defendants’ lawyers, the prosecutors, led by Assistant U.S. Attorney Benjamin Langner, called two Starkey employees to testify. Both explained they had conversations about Ruzicka leaving the company in the summer of 2015. Ruzicka was fired in September of that year by Starkey.

Post-publication update: Starkey Hearing Technologies’ former president, Jerry Ruzicka, was found guilty on March 8, 2018 in the $20 million federal fraud trial. In a split decision, W. Jeff Taylor, former president of Sonion was also found guilty in 3 of 16 counts against him, while Larry Miller and Larry Hagen were found not guilty.  Read the latest details on the verdict here.