In the following Hearing View, Dr. David Myers envisions a future transformed by the universal availability of hearing loops and telecoils. His presentation here is based on his acceptance remarks on receiving the 2013 Oticon Focus on People Award for Advocacy. The Focus on People Awards Luncheon took place May 16 at Oticon, Inc. headquarters in Somerset, NJ. 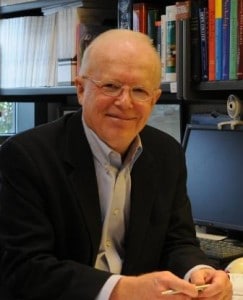 Thank you, Oticon, for shining your light on our grassroots effort to transform American assistive listening.

In 1999, while worshiping at Scotland’s Iona Abbey, I could not understand the reverberating words. My wife, noticing a hearing loop sign, nudged me to turn on the telecoils in my new aids. The instant result was a stunningly clear voice speaking from the center of my head. I was on the verge of tears.

In our subsequent UK sojourns, I have seen hearing loops spread to cathedrals and churches, to auditoriums, and to service points, such as ticket windows, post offices, and all London taxis.

Back home, I installed hearing loops in my home and office, enabling my TV and phone to broadcast wonderfully clear sound through my aids.

As you well know, other technologies also connect people to their phones and TVs. Where hearing loops excel, and where they complement proprietary wireless technologies, is in public settings. And that is the focus of our national hearing loop movement, which aims to double hearing instrument functionality—by enabling aids and implants to serve as wireless speakers for the broadcast of sound in public venues.

AN ARMY OF ADVOCATES IS ADVANCING THE CAUSE

Thanks to a growing army of volunteer advocates and professional installers, we now have thousands of recently looped venues.

Some are small, such as New York City’s 450 subway booths, all its future taxis, and likely all future U.S. passenger rail and subway cars. Some are bigger, such as places of worship places and auditoriums. And some are huge, such as airports and the Michigan State University basketball arena.

The advantages of these hearing loops include:

So on behalf of my fellow hearing advocates, I encourage you who are hearing care providers to support this hearing assistance movement:

And I encourage you, Oticon, and your sister companies, to continue supporting our effort to double the usefulness of hearing instruments—by designing and marketing aids with telecoils in a loop-friendly orientation.

Given the support of hearing consumers, of hearing professionals, and of the hearing industry, I envision a transformed future …

And I thank you all for collaborating with those of us in the hearing loss community to make that dream come true.

David G. Myers, PhD, is a professor of psychology at Hope College in Holland, MI.  Over the past decade, he has become perhaps the leading advocate for the use of hearing loops to improve life for people with hearing loss.  In addition to the Oticon Focus on People Award, Dr. Myers has received the 2011 American Academy of Audiology Presidential Award and the Walter T. Ridder Award from the Hearing Loss Association of America. He serves on the Advisory Council of the National Institute on Deafness and Other Communications Disorders (NIDCD). For further information, go to HearingLoop.org.