Frequency discrimination in children at a glance

When considering the needs of young children regarding their development of speech, language, reading, and complex auditory processing the development of a clinically appropriate pediatric frequency discrimination task may be the most meaningful as a screening tool for language and literacy impairments in young children. Evidence has shown that early intervention for dyslexia and language deficits has a sensitive period of development before the onset of formal reading5. Thus early identification of frequency discrimination weaknesses during the pre-reading phase of development can lead to appropriate and ideal interventions in other developmental areas that may be at risk for impairment or delay. A frequency discrimination task should evaluate a child’s perception of pitch, which is greatly correlated with their phonological and literacy skills. Evaluating a child’s perception of pitch or pitch contour gives insight into the skills that they currently have as well as how likely they are to acquire skills appropriately as they age6.

A typical procedure for identifying the smallest difference in frequency (referred to as just noticeable difference or JND or difference limen or DL) that a child (or adult) can recognize would utilize a target tone surrounded by standard tones2. The target tone differs from the standard tone requiring the child to identify when a tone was different from the target or when a tone was higher/lower than the target. The differences between the tones would be decreased in a stepwise fashion until the child gave an incorrect response, after which a bracketing method would be used by increasing and then decreasing the difference between tones to find the child’s threshold.

Perhaps one of the most referred to studies on frequency discrimination in children is one by Jensen and Neff 7. It can serve to provide at least a general idea of the quantification of frequency discrimination in children. These researchers tested children of four, five and six years of age. They used a standard tone (or reference tone) of 440 Hz, 400 msec in duration and presented at 70 dB SPL. Contemporary psychoacoustic procedures were employed. The participants would likely be classified as (at least in our view) as trained. As can be seen in figure1 frequency discrimination improved with age. Not shown in figure 1 however, was the considerable variability which decreased in age. In young children this large variability in performance seems a common problem in gaining accurate insight as to the real discrimination abilities of this age group. Training opposed to no training and the particular psychoacoustic approach are heavy factors in the difference limen (DL) obtained. For example, untrained adolescents have a DL of around 20 Hz for a 1000 Hz standard tone compared to the trained study by Jensen and Neff where DLs were under 10 Hz for 6 year olds.

As previously discussed, the involvement of attention, memory, and executive function in the evaluation of frequency discrimination can be more difficult in children when compared to adults6. Of the studies reviewed, designs typically used a two-interval forced-choice paradigm in which children would have to choose which tone was higher and which was lower, or indicate which pair of stimuli contained a sound that was a different tone from the other in its pair. Others opted for a three-interval forced-choice instead, wherein participants would be presented with two standard stimuli, and one target stimuli, and would have to indicate which tone was “the odd one out”. Proponents of the three-interval design argued that results from two-interval designs were less consistent due to participants’ tendency to answer that the tones were the same when unsure, however, researchers recognized that a three-interval task may be demanding on the working memory capabilities of young children2, 4, 8.

Most studies concluded that the ability of children to discriminate between frequencies fully matured around 7-8 years old4, 6, 8, 9, however, some studies found that children did not reach their best possible performance until ages10 11 8-10. Barry et al., Rose et al., and Sutcliffe & Bishop noted that many of their participants did not perform well on frequency discrimination tasks due to the complexity of the task or due to the memory and attention the task required. Rose et al. concluded that poor adherence to the task was more detrimental to the younger children’s performance than the immaturity of their sensory systems, but other studies purport that frequency discrimination capabilities improve with age regardless of other cognitive functions. Adjustments such as lengthening stimulus length, providing visual components to the task, incorporating practice trials, and having children select the “odd one out” rather than the higher or lower tone have been found to improve the performance of children younger than 10, but many children still struggle due to attention and memory in addition to poorer frequency discrimination capabilities in comparison to adults7.

Procedures and norms for children must first be established to utilize frequency discrimination tasks as possible forms of assessment or screening for developmental speech and language delays. While research has been conducted on the performance of infants, children, and adults, norms for children have not yet been fully established, making a frequency difference detection task a poor screening tool for auditory or language delay or deficit. As discussed above, many of the testing protocols are difficult for young children to follow. While modifications such as including visual components can be helpful for participants, completion of the frequency discrimination tasks is still difficult and variable for children under 10 years old. Further research is needed for this testing to accurately evaluate children with appropriate tasks in a manner that is quickly administered and has established norms for results must be developed. 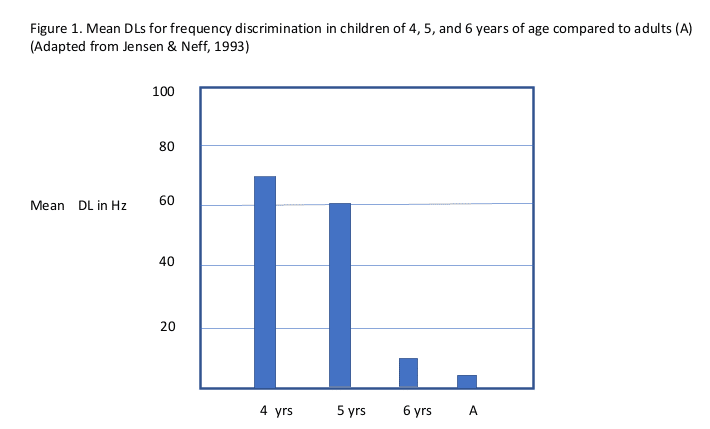