Of the millions of applications (apps) available for smartphones, many developers offer a number of sound measurement apps, including some intended to function as sound level meters (SLMs) in which the smartphone’s built-in microphone is used to pick up the sound for measurement.  In some more sophisticated smartphones, an external microphone can be used.

Accurate SLMs are expensive and not accessible to the average person.  On the other hand, smartphones are widely available and allow for various downloadable applications.  Many of these “apps” allow the smartphone to be used as a SLM, and provide a cost-effective solution to help determine noise levels in different environments{{2}}[[2]] Robinson, D. Tingay, J. Comparative study of the performance of smartphone-based sound level meter apps, with and without the application of a ½” IEC-61094-4 working standard microphone, to IEC-61672 standard metering equipment in the detection of various problematic workplace noise environments, Inter.noise 2014, Melbourne, Australia, November 16-19[[2]].

Based on this availability, the questions for this post, and those that seem to be asked somewhat frequently are: 1) can a smartphone SLM app be used as an informative substitute for measuring sound levels, and 2) if such uses occur, will the accuracy be acceptable to substitute for measurements made with a dedicated and calibrated SLM?

The answer to the first question is “yes.”  The answer to the second question should be, “let’s not get carried away at this time.”  An analogy might be: can a pickup do the same job as a semi tractor?  To a limited extent, “yes,” in that it can haul products, but it will have its limitations.  This would not be a fair comparison, but neither is a dedicated SLM and a smartphone app – at least not currently.

Still, an advantage of the use of a smartphone SLM app could be to make sound loudness measurements more readily available in situations and at times when a dedicated and quality SLM is not available.

A few studies have taken a systematic and controlled approach at comparing smartphone SLM apps.  One of the better studies was reported by Kardous and Shaw (2014){{3}}[[3]] Kardous, C. A., & Shaw, P. B. (2014). Evaluation of smartphone sound measurement applications. The Journal of the Acoustical Society of America, 135(4), EL186-EL192[[3]].  In addition to selecting and characterizing the functionality and accuracy of selected apps, they wanted to determine if the smartphone apps could be relied on to conduct participatory noise monitoring in the workplace.  This meant that smartphone SLM apps were selected based on their ability to measure occupationally relevancy criteria: (1) ability to report un-weighted (C/Z/flat) or A-weighted sound levels, (2) 3-dB or 5-dB exchange rate, (3) slow and fast response, and (4) equivalent level average (Leq) or time-weighted average (TWA).

Additionally, considerations were given to apps that allowed calibration adjustment of the built-in microphone through manual input or digital upload files, as well as those with reporting and sharing features. 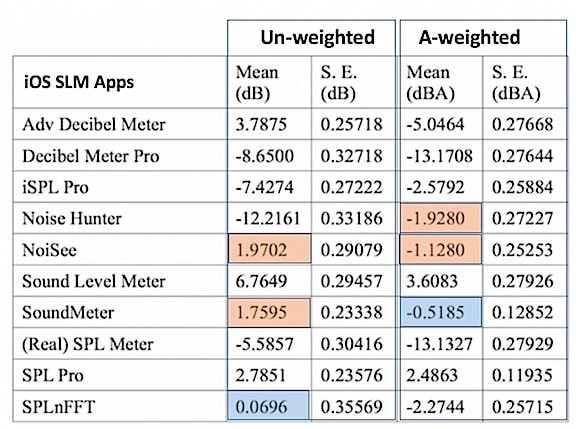 Figure 1. Mean and standard Error of 10 iOS SLM app un-weighted and A-weighted sound levels. Best agreement from the actual reference values for each is in blue, and those within ± 2dBA, are shown in orange (± 2dBA chosen because OSHA noise standard [29 CFR 1910.95] considers type 2 instruments to have an accuracy of ± 2dBA). The agreement with the reference sound level measurements shows that the apps in colored boxes may be considered adequate (over the range tested) for certain occupational noise assessments.

Kardous and Shaw acquired representative samples of popular smartphone apps.  Of 130 for the iOS®, 10 met their selection criteria, with the results posted in (Figure 1).  A total of 62 Android® apps were examined, with only 4 partially meeting their selection criteria and subjected to additional testing.  The inability to find Android-based apps having similar functionality, coupled with a lack of conformity of features of the same apps between different devices, resulted in high variance in the measurements made.

Overall, the Android-based apps lacked the features and functionalities found in iOS apps.  This is likely due to the development ecosystem of the Android marketplace and users’ expectations for free or low-priced apps and the fact that Android devices are built by several different manufacturers (Kardous and Shaw, 2014).  (Figure 2). 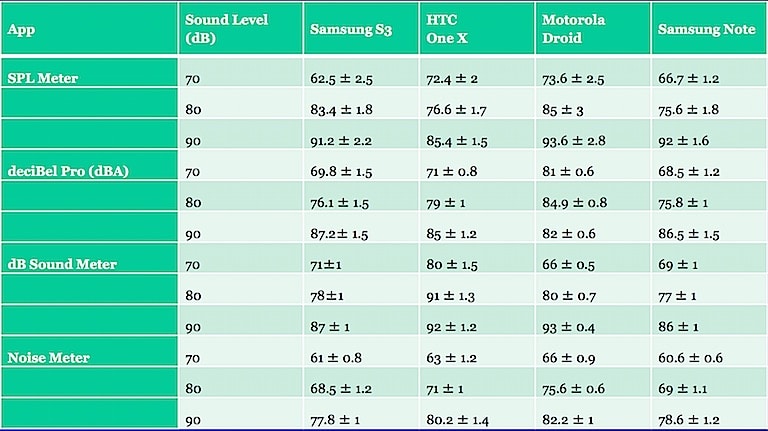 Figure 2. Android SLM app un-weighted comparisons to 70, 80, and 90 dB SPL sound input levels. The inability to find Android-based apps having similar functionality, coupled with a lack of conformity of features of the same apps between difference device, resulted in high variance in the measurements made{{4}}[[4]] Kardous, C., and Shaw, P. Evaluation of smartphone sound measurement apps, U.S. Department of Health and Human Services Centers for Disease Control and Prevention National Institute for Occupational Safety and Health, Cincinnati, Ohio, PowerPoint Presentation, (2014a) [[4]].

Because of the inability to obtain Android apps that met the selection criteria, a comprehensive experimental design and analysis comparison was not possible as was for the iOS.  Only a few apps were available on the Windows® platform, but none met their selection criteria.

The iOS SLM apps were tested by Kardous and Shaw (2014a) on the iPhone® 3GS, iPhone 4S, iPhone 5 and iPad 4Gen.  The iPhone 3Gs had the best agreement with a mean difference of 0.44 dB and -0.71 dBA.  Part of the problem was that microphones were supplied by a new supplier for the iPhone 5 and iPad 4th generation.  The iOS 6 allows developers of SLM devices to bypass the speech filters and input gain control.

Results were quite variable, due to the following reasons, according to Kardous and Shaw (2014a).

Next Week – Part II of Smartphone Sound Level Meter Apps.  It will focus on the acceptable accuracy to meet occupational noise requirements and issues involved in preventing many smartphone apps from achieving this goal.