Ear Impression History – The Slow Death of Powder and Liquid 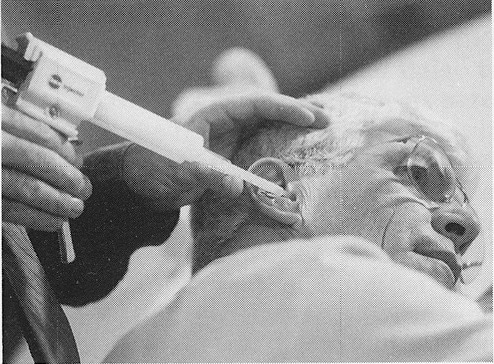 Logic would suggest that with the advantages of silicone ear impression material, that the transition from ethyl methacrylate to silicone would have occurred fairly rapidly. Not so, as ear impression history shows. In essence, the 1970s was the main transition period, but it started in the 1960s, and continued well into the mid 2000s.

The latter part of the 1960s introduced quality silicone impression materials.  However, silicone ear impressions did not take off as one might expect. One of the reasons expressed related to the high cost of a silicone impression versus that made using ethyl methacrylate. Also, individuals were used to a particular material and method, with what they considered satisfactory results.  Plus, as Berger1 stated at the time of his writing on this topic in 1974, disagreement continued as to whether silicone was more difficult to control and handle, and whether it enabled a better finished product.  Additionally, the quality of silicone varied among suppliers.

1974 – Early plastic ear impression material using a powder and liquid base (Ardente and K-21) were a mainstay in Europe as well3.  The powder base was mixed with a liquid consisting of solvents and thinning agents with an addition of anti-wrinkle lacquer. The powder and liquid were mixed and when in a plastic condition, were formed into a sharply pointed cone and introduced into the ear canal and auricle with slight finger pressure. This impression material was ethyl methacrylate, in a monomer-polymer dough consistency.

It was during the 1970s that addition cure silicones made their impact in dentistry and followed quickly to ear impressions, but not used widely.  Addition silicone consisted of equal parts of monomers and polymers.

During the 1970s, polyether and silicone impression materials were modified to improve working time, viscosity, and flexibility.  The introduction of addition silicones improved the accuracy of the impression.  Additionally, automatic mixing systems for addition silicones were introduced, at least in dentistry, simplifying their manipulation, reducing the number of voids in impressions, and reducing the amount of material wasted4.

As mentioned in a previous post, the instant earmolds introduced in the 1970s used silicone impression material, but did not have a massive impact for hearing aid dispensers, but found rapid use for noise protection and as swim plugs.

1991 – A Major Change in Ear Impression Materials and Technique

A new type of hearing aid was developed in 1991 that resulted in a major adjustment to the packaging and delivery of how at least some ear impressions were made. Philips Hearing Instruments of the Netherlands introduced the XP Peritympanic hearing aid which was worn entirely within the external auditory canal5. 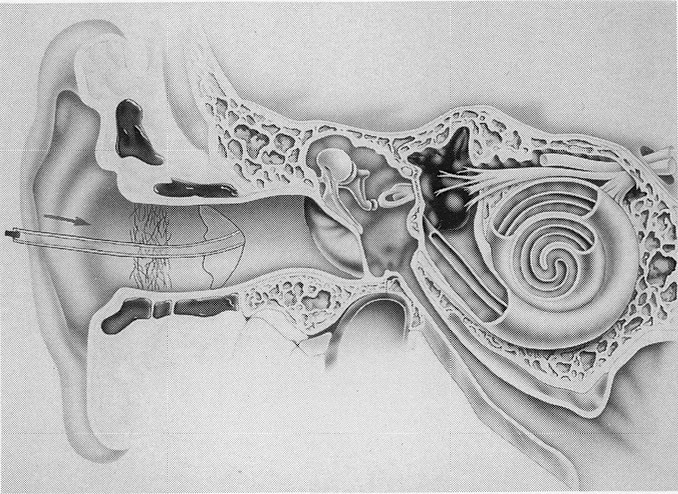 Figure 1. The XP Peritympanic ear impression procedure employed a specially designed silicone rubber aerating tube inserted into the ear canal until it comes into contact with the tympanic membrane5.

The ear canal was then filled with a specialized silicone from an injection gun (Figure 2). This was a low viscosity material mixed within the injection gun cannula from a cartridge that separated the two addition silicone components. The low viscosity was required to reach the TM, to be able to mix and eject from the gun, and without any undue pressure to the TM.  This appears to be first use of a cartridge and injection gun to make ear impressions of the ear.

Figure 2. The XP ear impression was taken by filling the ear canal with a special low viscosity liquid silicone injected with an injection gun. This appears to be the first use of this combination for ear impressions. The gun and silicone were provided by Dreve Otoplastik, with the silicone being specially-made for this application5.

The XP event started the use of lower viscosity ear impression material and the use of an injection gun holding a two-part silicone cartridge with the hearing aid industry. This, in spite of the fact that essentially no other manufacturer at the time recommended that the impression terminate at the TM. By the mid 2000s, the use of this combination was common in the hearing aid industry and continues to this day by those still taking ear impressions.  The injection gun/cartridge system resulted in no messy cleanup, precise and automatic mixing through disposable mixing cannulas (tips), and virtually bubble free impressions.

In Spite of This….

“Yes, I would guess maybe 20 to 25 percent of our customers still use powder & liquid mix.  There’s really no benefit, it’s essentially a personal preference issue, but powder & liquid mixes do make it more difficult for all of us.”

It seems that powder and liquid ear impression material ruled for almost 30 years until tub and tube silicone emerged (and then later the gun/cartridge system).  It was true that silicone eliminated the concerns about shrinkage over time and the elimination of the liquid being absorbed by the tools used to mix it.  Still, the mixture could be manipulated by some of the same variables as powder and liquid, such as adding too much hardener.  While this did speed up the curing process, it also caused expansion of the ear during the impression process7.

To circumvent inappropriate hand mixtures from happening, one-to-one silicone was offered by ear impression suppliers in a pre-measured format, as shown in Figure 3.

These provide a rapid and convenient way to utilize ear impression material (Figure 4).  Mixing is exact through the cannulas and there is no messy loading of syringes.  The impression material has a lower viscosity, but has been improved to be thixotropic.

Many suppliers of ear impression material have their own “brand” of cartridge material, although most comes from similar sources.  Differences often relate to the viscosity and Shore hardness of the material (explained in a later post).

Figure 5. Economy kits of Dur-A-Sil ear impression material in 20 Shore A hardness. Unlike other addition silicones, this used a wax, rather than oil, release agent.

About the same time as most manufacturers started providing ear impression cartridges, one manufacturer (Insta-Mold Products Inc.) developed an equal part addition silicone ear impression material with wax as a relief agent, rather than oil.  This was a 20 Shore A vinyl silicone that was non sticky, easy to use, and cured dry without oils leaking out.  It was available in 20-ounce economy kits (Figure 5) and in pre-measured mini-packs.  It was sold under the names of Dur-A-Sil Equal and Rebound.  It may have been sold under other brand names as well.