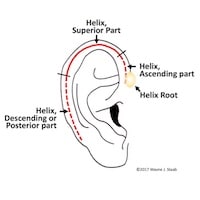 The human ear is an important defining feature of the human face.  It has subtle structures that convey signs of age and sex that are unmistakable, yet not easily defined.

The anatomy of the external ear, also known as the auricle or pinna, is complex and remarkably inaccurately described by most authors.  Although ear anatomy use is approached differently by various disciplines (surgeons, dysmorphologists, anatomists, artists, forensics personnel, hearing aid dispensers, etc.), it is incumbent that identification features and terminology be consistent when describing the ear.

This is a first in a series of presentations on the auricle, and describes the basic anatomy of the auricle.  Future posts will describe its dimensional anatomy.

The anatomy of the auricle in this post follows the standardization of terms provided by the work of an international group of clinicians working in the field of dysmorphology, of which their work on the ear is part of a series of six papers defining the morphology of regions of the human body1.  Their goal is to standardize the terms, but even more so, to reach consensus regarding their definitions.  Descriptions in this post follow their suggestions.

Surface Structures of the Auricle/Pinna

The major landmarks of the auricle/pinna are depicted in Figure 1.  The auricle consists of skin (with adnexa), cartilage, and extrinsic and intrinsic muscles.  The auricle is the visible, funnel-like, flap-like part of the hearing mechanism that is fastened to the side of the head at an angle of about 30 degrees.  Its surface is uneven and filled with pits, grooves, and depressions.  It is commonly called, the ear. 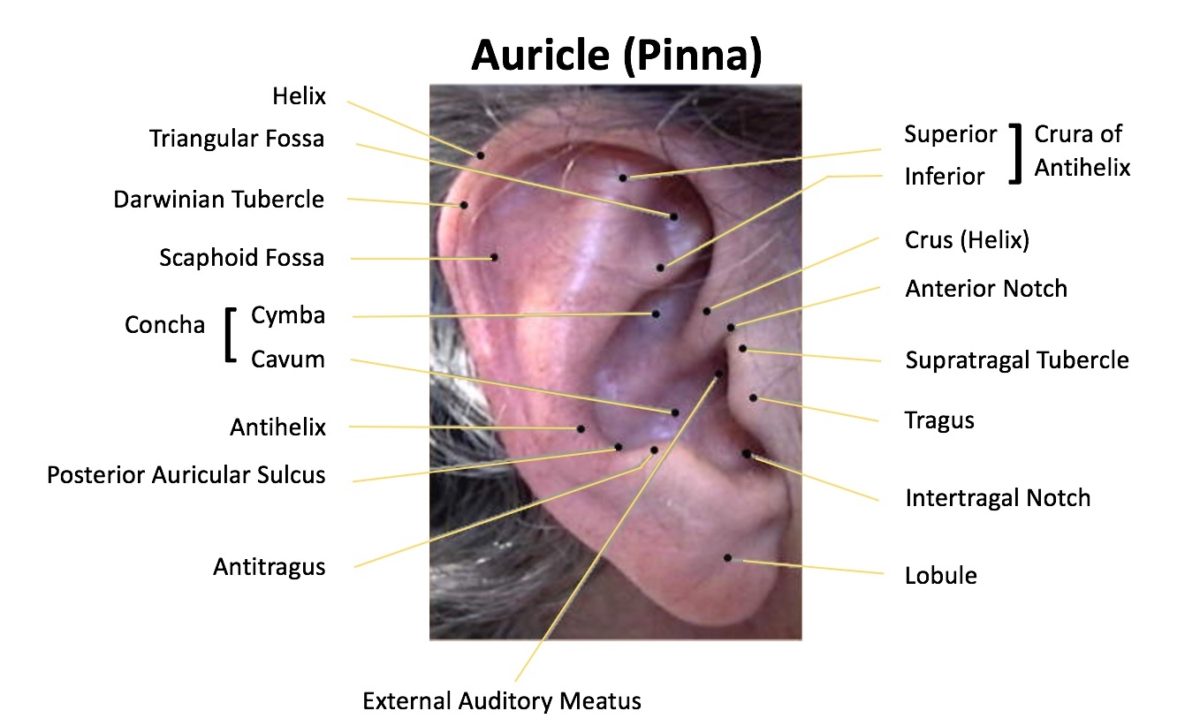 Detailed Identification of the Surface Structures of the Auricle

Figure 2. Normal anatomy of the helix: ascending, superior, and descending parts. The helix root area, where the helix arises from the scalp, is shown by the yellow oval.

The helix is the outer rim-like periphery of the ear that extends from the superior insertion of the ear on the scalp (root) to the termination of the cartilage at the earlobe (Figure 2).  The helix can be divided into three approximate parts:  1) the ascending helix, which extends vertically from the root, 2) the superior helix, which begins at the top of the ascending portion and extends horizontally and curves posteriorly to the site of Darwin’s tubercle, and 3) the descending helix (sometimes called posterior), which begins inferior to Darwin’s tubercle and extends to the superior border of the earlobe.  The lower portion of the posterior part is often non-cartilaginous.  The border of the helix usually forms a rolled rim but the helix is highly variable in shape.

Helix root – Superior insertion of the auricle to the scalp. 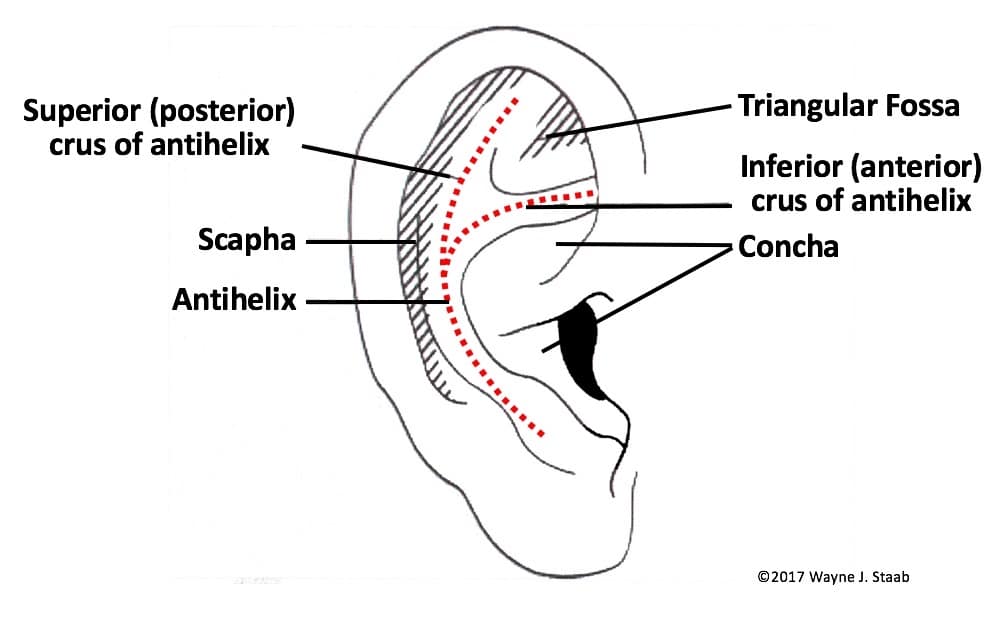 Figure 3. Normal anatomy of the antihelix, shown in the red dotted lines.

The antihelix is a Y-shaped curved cartilaginous ridge arising from the antitragus and separating the concha, triangular fossa, and scapha/scaphoid fossa (Figure 3).  The antihelix represents a folding of the conchal cartilage and it usually has similar prominence to a well-developed helix.  The stem (the part below the bifurcation) of the normal antihelix is gently curved and branches about two thirds of the way along its course to form the broad fold of the superior (posterior) antihelical crus, and the more sharply folded inferior (anterior) crus.  The inferior and superior crura of the antihelix can vary both in volume and degree of folding.

This is the lower cartilaginous ridge arising at the bifurcation of the antihelix that ends beneath the fold of the ascending helix, and separates the concha from the triangular fossa (Figure 3).  The inferior antihelical crus runs in an anterior and slightly superior direction, is usually sharply defined, and appears less variable than its superior counterpart.  A synonym is anterior crus of the antihelix.

This is the upper cartilaginous ridge arising at the bifurcation of the antihelix that separates the scapha from the triangular fossa (Figure 3).  The superior crus runs in a superior and slightly anterior direction and is usually less sharply folded than the lower portion and inferior crus.  A synonym is the posterior crus of the antihelix.

The scaphoid fossa is the groove between the helix and the antihelix.

This is a concavity bounded by the superior and inferior crura of the antihelix and the ascending portion of the helix.

The tragus is a slightly inferior protrusion of skin-covered cartilage, anterior to the auditory meatus (Figure 5).  The inferoposterior portion of the tragus forms the anterior wall of the intertragal notch.

Figure 4.  Normal anatomy of the helix crus.  The crus of the helix extends about one half to two thirds the distance of the concha.

Figure 5.  The tragus is a cartilaginous flap that partially occludes the opening into the external auditory meatus.

The intertragal notch is the space between the tragus and antitragus.  It is the most inferior portion of the concha (Figure 7).

The concha is a fossa (shallow depression or hollow) bounded by the tragus, intertragal notch, antitragus, antihelix, inferior crus of the antihelix, and root of the helix, into which opens the external auditory meatus.  It is partially bisected by the crus of the helix into the cymba superiorly and cavum inferiorly (Figure 8).

The lobule is the inferior extremity of the auricle.  It is soft and fleshy, with no underlying cartilaginous framework.  It is bounded on its posterosuperior border by the end of the descending helix, on the anterosuperior border by the inferior border of the antitragus and anteriorly by the intertragal notch (Figure 9).  The earlobe is highly variable in size and in the degree of attachment to the anteroinferior portion to the face.

Figure 8.  The concha is the deepest depression or hollow of the auricle.  It is partially divided into a superior portion (cymba) and an inferior portion (cavum) by the crus of the helix.

Figure 9.  The lobule is the inferior extremity and contains no cartilage.

Following posts will describe dimensional characteristics of the auricle.