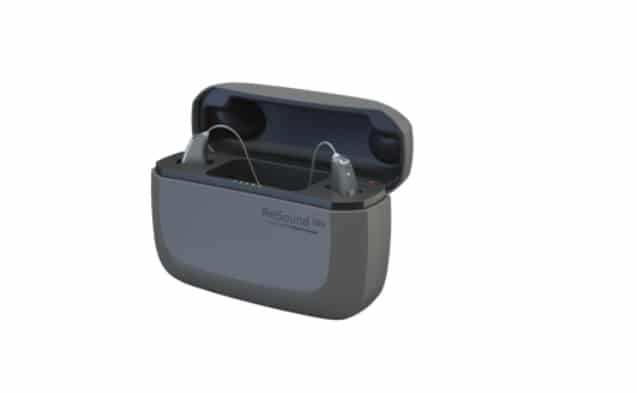 GN Hearing has announced the release of the new ReSound LiNX Quattro. The latest iteration of the popular LiNX hearing aid line is said to be powered by new technology, including a new chip platform, and for the first time, offering lithium-ion rechargeable technology.

The addition of lithium-ion (Li-ion) rechargeable batteries makes ReSound the third major hearing aid manufacturer to incorporate the technology into its hearing aids.

Expanding upon the company’s leading position in 2.4 GHz connectivity and remote fine-tuning features, the new LiNX Quattro is said to offer:

According to the company, the Quattro has “a completely rewritten sound processing package, a redesigned wireless radio with extra signal strength and a unique utilization of microphones, sounds are passed to the amplifier without being altered.”

Compared to its predecessor, the ReSound LiNX 3D, the new chip enables 100% faster processing, 100% additional memory, 35% increase in frequency bandwidth and the highest input dynamic range in the industry.

Shortly after news of the upcoming release of the LiNX Quattro, GN announced that a new partnership with Google will allow the Quattro hearing aids to offer full direct streaming capability for Android phones, similar to the audio streaming capabilities currently available in other Made for iPhone (MFi) hearing aids. Sources say this new feature will likely arrive in the first few months of 2019 and may also provide backwards compatibility to earlier 2.4 GHz models, but this is not yet confirmed.

“I use ReSound Assist regularly. On one occasion, my audiologist noticed that I kept turning up the volume, so she reached out to me and adjusted my hearing aid immediately. Whether I’m at the football stadium, out to dinner in the city, or visiting with my grandchildren, I know that my hearing can be monitored and adjusted easily and efficiently.”

According to the company, a recent study of HCPs and users found that 100 percent of HCPs using ReSound Assist said they would recommend remote fine-tuning to peers, and 94 percent said it helps them provide users with a better hearing experience. The same study also showed that 77 percent of users think their new settings improve their hearing, while 89 percent said they would recommend remote fine-tuning to other hearing aid users.

The new LiNX Quattro is said to “represent the smallest and longest lasting 2.4 GHz integrated Li-ion rechargeable hearing aid on the market”. It comes with a portable charger that holds three extra charges and offers quick charge. With 25% less power consumption when streaming, the new LiNX Quattro is the only hearing aid that offers 24 hours of use even when streaming 50% of the time and 30 hours of use on a fully charged battery without streaming.

The devices became available for sale in the US and Canada in September, 2018.

Update, September, 2019: Google officially announced the release of Android 10 software, which for the first time, will offer audio streaming capability from compatible Android devices to hearing aids. The first phones to offer the new feature will be Google’s Pixel phones. GN and Cochlear will be the first hearing device manufacturers to offer the feature.