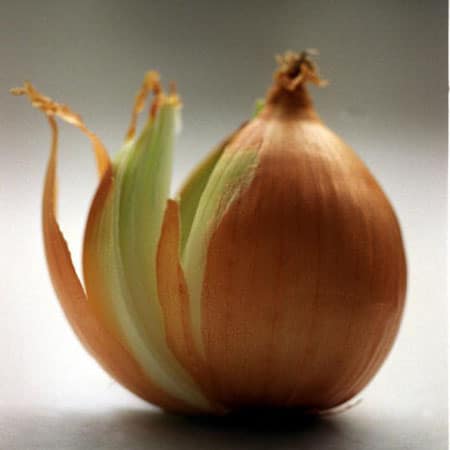 “Peeling the Onion” is a monthly column by Harvey Abrams, PhD.

John’s current stop on his patient journey is the action stage – that stage of the journey when John, after contemplation and preparation, initiates change and takes action to resolve his communication problems. Recall that the Transtheoretical (changes of change) Model consists of 6 stages:

In the previous two posts describing the action stage, I explored how John is likely going to decide who to visit on the basis of his perception of hearing aids as either a medical device or consumer electronic device  and, assuming he takes the healthcare route, the influence of John’s primary care provider (PCP), ear, nose and throat specialist, or hearing healthcare professional (HCP) on the eventual purchase of hearing instruments.

In this post, I’d like to continue to explore the MT9 data further to see if we can uncover those factors that influence John to make certain decisions about where he will go for his care and his perception of the care he received.

Since John is ready to take action, we might assume that his reason for visiting a particular HCP is to purchase hearing aids. The MT9 data as illustrated in Figure 1, on the other hand, tell us another story. 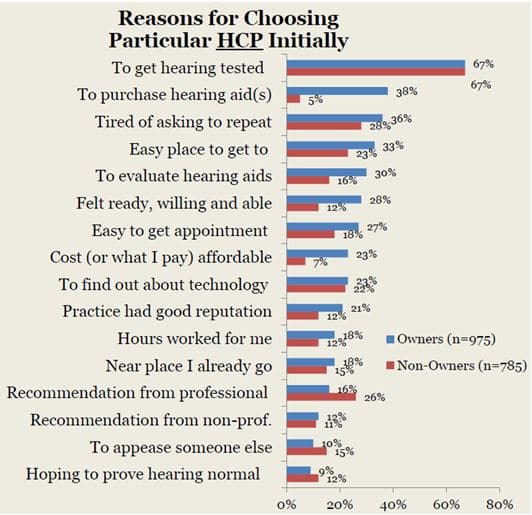 In fact, the primary motivation for John’s initial visit is to have his hearing tested. Two-thirds of both eventual hearing aid owners and non-owners who responded to the MT9 survey reported that this was the case.

Less than half of owners (and almost no non-owners) made an appointment specifically for the purpose of purchasing hearing aids although eventual owners tended to be further along in their journey and some more prepared to consider a solution than non-owners. Among both hearing aid owners and non-owners, the most important reason, when forced to choose one (not shown in the figure), is still “to assess level of loss.”

The top most important reasons for owners to visit a HCP (not shown) are:

The top most important reasons for non-owners to visit a HCP (not shown) are:

Equally revealing are the reasons that John will likely purchase his hearing aids from a particular HCP. 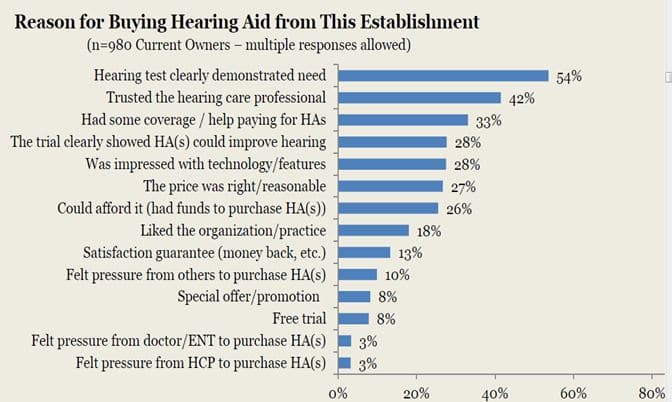 Figure 2. Reasons respondents gave for purchasing their hearing aids from a particular practice

Figure 2 indicates that when asked to choose, the top most important reasons are:

I bolded the top reason that John is likely to purchase his hearing aids from a particular provider because many audiologists limit their assessments to pure tone audiometry and speech recognition testing in quiet – two measures that are not very likely to demonstrate to John that he needs hearing aids. George Lindley captured this issue in an excellent article he wrote for Audiology Today titled, “They Say ‘I Can’t Hear in Noise’, We Say ‘Say the Word Base’”.

Another factor that will likely influence whether or not John purchases hearing aids from a particular HCP is how satisfied he is with that provider. Figure 3 suggests that most of the MT9 respondents who have visited a HCP in the past 5 years are very satisfied with their provider, although eventual hearing aid owners tend to be more likely to be satisfied with their HCP than non-owners.

Figure 3. Respondents’ reported level of satisfaction as a function of hearing aid ownership for those who consulted with a hearing healthcare professional in the past 5 years.

A less than satisfactory experience may have been a reason why some non-owners did not purchase hearing aids. Nonetheless, the vast majority of both groups are more satisfied than not. The top-3-box satisfaction score (on a 7-point scale) among those who saw a hearing care professional in the last 5 years was 95% for all owners and 87% for all non-owners. Those who had seen an HCP in the last 5 years were asked to rate their level of satisfaction on a series of high level areas.

The reasons for the respondents’ level of satisfaction are illustrated in Figure 4. The overall perception of the service, practitioner, and the organization overall are quite positive. The highest ratings are given to quality of service during both the fitting period and after the purchase, and the professionalism of the practitioner. Two-thirds of the respondents gave these factors the highest rating, and the vast majority are more satisfied than not. The lowest ratings are given to the selection of hearing aids and purchase policies. Less than half give these items the highest rating, but the majority are more satisfied than not.

We’ll continue with John’s action stage and what MT9 tells us about John’s satisfaction with his provider and the services he receives in my next post.

Harvey Abrams, PhD, is a principal research audiologist in the hearing aid industry. Dr. Abrams has served in various clinical, research, and administrative capacities in the industry, the Department of Veterans Affairs and the Department of Defense. Dr. Abrams received his master’s and doctoral degrees from the University of Florida. His research has focused on treatment efficacy and improved quality of life associated with audiologic intervention. He has authored and co-authored several recent papers and book chapters and frequently lectures on post-fitting audiologic rehabilitation, outcome measures, health-related quality of life, and evidence-based audiologic practice.  Dr. Abrams can be reached at harvey_abrams@starkey.com