Price Functions in the US Wholesale Hearing Aid Market

This series now steps into the dark and murky realm of manufacturers’ wholesale pricing of product to see how the market has changed since 2013.  The caveats remain the same:

And so Hearing Economics foolishly rushes in where wiser heads avoid treading, continuing to “mine for morsels of truth.”  The one advantage now is a few more years of data. Those extend the functions and paint more believable pictures to buttress the analyses.  We’ll keep the analyses simple, in line with the ever-present Econ 101 series that pervades this section.  Mostly, we’ll leave the figures to do the work. 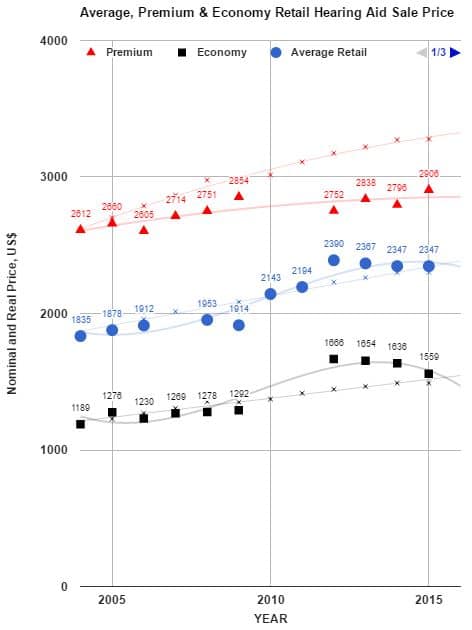 Posts 1 and 2 in the 2016 Pricing series described retail hearing aid Price functions in the US market since 2004 (Fig 1).  This much was established for the last decade: 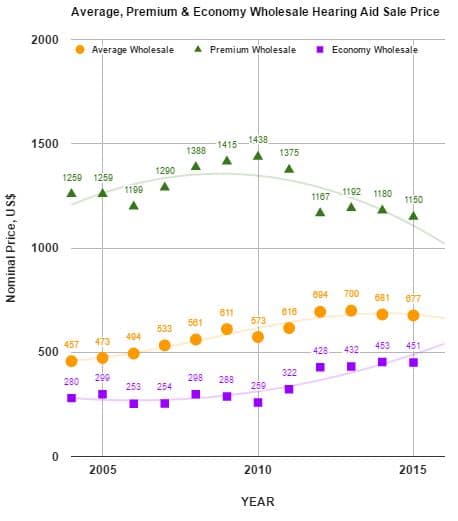 Figure 3. Wholesale Price for Premium (green), Economy (purple) and all-aid Average (gold) hearing aids in the US since 2004.

That was then, but what a difference a few years makes.

The wholesale market has a new look now and this is the big news. Dramatic changes in wholesale price functions in the last few years are manifest by comparing Fig 3 (now) to Fig 2 (then).1

Headlines emanating from public policy groups, federal agencies, the popular media, and consumers are surfacing  with increasing frequency this year.  Their gist is that hearing aid prices are high and continually increasing.  On the surface–in nominal dollars–and on average, the claim is supported at retail and wholesale levels (Figs 1 and 3, Average and Economy categories).

But going up compared to what? Measured how?  The role of Hearing Economics is to bring economic thinking to bear on superficial claims, including those made when Price is treated like a political football. Just as our beloved decibel needs its .0002 dynes/cm2 to make sense, Price needs a reference value such as the consumer price index to make sense as well.

When Price is referenced to 2004 dollars2, we know from Fig 1 that inflation-adjusted Price isn’t rising in general and is actually falling for Premium products (Fig 1).  Something similar (Fig 3) but even more dramatic is happening on the wholesale level and that is the subject of next week’s post.

1Differences are mainly due to changes in the market, it’s important to note that the functions have been adjusted and fleshed out with more and better numbers from industry sources, adding corrections to the 2013 functions.

2CPI adjusted functions in the figures are intended to give readers a sense of inflation effects on the value of the US dollar by year, not to measure how wholesale hearing aid prices compare to the wholesale “basket of goods.”  We can’t do the latter because we don’t have data for some of the variables needed to calculate  PPI (producer price index) for hearing aids in the US market.