Earwax – Getting the Gunk Out 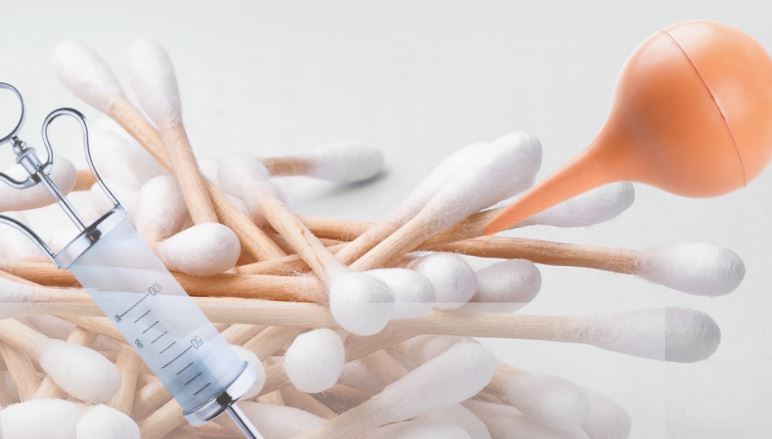 Below, readers will find information about dealing with earwax issues at home, as well as when it may be appropriate to seek the guidance of a professional.

The purpose and generation of earwax has been covered in previous posts.  This post relates to what to do for normal management of earwax, and what to do if earwax becomes a problem.

Under ideal circumstances there is no need to clean your ear canals because movement of the jaw helps the ears’ natural cleaning process. However, we all know that this isn’t always so.  Many problems can be handled with home treatment, but professional help is most often needed to remove tightly packed cerumen.  The American Academy of Otolaryngology discourages earwax removal unless excess earwax is causing health problems.4

Unless there is a blockage, it is best to leave earwax alone.  Remember, earwax is needed to protect the ear. Having earwax does not mean that your ears are not clean.

Still, ear canals should be cleaned when enough earwax accumulates to cause symptoms or to prevent a needed assessment of the ear by your physician. This blockage condition is called cerumen impaction

When Should I See a Doctor for Earwax Problem?

Earwax that is causing problems can be removed by your healthcare provider. Your provider may use irrigation (ear washes), a curette (tiny spoon-shaped tool), or suction.

In the event that home treatments identified later in this post are not satisfactory or earwax has accumulated so much that it blocks the ear canal, your physician may prescribe eardrops designed to soften earwax or may wash or suction it out.  Occasionally, an otolaryngologist may need to remove the earwax using microscopic visualization.

Symptoms to check to decide if and when you should see a physician.  You should consult with a physician when:

Watch closely for changes in your health, and be sure to contact your doctor if you have:

A number of earwax removal methods are effective, but their comparative merits have not been determined.5

Figure 1. The use of cotton swabs is not recommended for earwax removal.

Cotton swabs (Q-tips or cotton buds) are not generally advised for earwax removal, although it is suspected that they are the most commonly-used tool.  They are believed to push most of the earwax farther into the ear canal and remove only a small portion of the loose and sticky wax from the outer portion of the ear canal that happens to adhere to the fibers of the swab (Figure 1).

Additionally, if the cotton swab is pushed in too far or used carelessly, it may perforate the eardrum, as can any other object inserted into the ear canal to remove earwax.  Abrasion of the ear canal from careless use, particularly after water has entered from swimming or bathing, can lead to ear infection.

Because use of cotton swabs for earwax removal is not recommended, what alternatives exist, if any?

Normal amounts of earwax in and around the outer ear can be removed by using a soft washcloth or facial tissue after washing or taking a shower.

Self Irrigation for Earwax

A common home remedy for removing ear wax, as long as you do not have any complicating factors as listed earlier in this post, involves the use of a shower with warm water, hydrogen peroxide (or hydrogen peroxide mixed with an equal amount of room temperature water), or warm mineral oil, and a bulb syringe.  Warming the liquid is important because cold or hot liquid in the ear canal can cause pain and/or dizziness (vertigo).  All these supplies can be obtained from any drug store.

The mineral oil or hydrogen peroxide is used to soften and loosen the earwax.  In some cases, twice a day application for up to five days may be necessary.

The University of Texas Health Services instructions for self-irrigation are somewhat modified in the instructions that follow, supplemented by contributions from other authors6,7

Before entering the shower, pour a few drops of hydrogen peroxide into the affected ear canal. Then lie down on the opposite side or just stand with your head tilted to one side for a couple of minutes. You may hear a crackling or bubbling sound as the hydrogen peroxide works.

When in the shower, suck up warm water (not hot water) from the palm of one hand into the bulb syringe. Then, with the head straight, gently place the tip of the syringe into the ear canal parallel to the floor and slightly pointing towards the back of the head (Figure 2).

Figure 3. Positioning of the bulb syringe and water direction flow.

Pull the external ear up and back as shown in Figure 3, and aim the nozzle of the syringe slightly upwards and backwards so that the water flows along the roof of the canal, cascades as it comes in contact with the eardrum, and turns back. The irrigation solution flows out of the canal along its floor, taking wax and debris with it.8,9 The solution used to irrigate the ear canal is usually warm water, normal saline,10 sodium bicarbonate solution,11 or a solution of water and vinegar to help prevent secondary infection.

Do not point the tip of the syringe towards the front of the head. (It is okay if the syringe points slightly upward.) As soon as the insertion of the tip into the ear canal stops, vigorously squirt the warm water into the ear canal. You can repeat this process as often as needed until wax is removed. If you experience pain at any point, stop immediately and contact your physician.

Direct the water into the top of the ear canal, then tip your head to let the earwax/solution drain out.

Irrigation can be performed at home with proper equipment as long as the person is careful not to irrigate too hard. Make sure the flushing solution is body temperature. Cool or hot fluids in the ear can cause dizziness. Do not use a dental irrigation device, such as a Water Pik, to remove earwax. The force of the water can injure the ear canal and may rupture the eardrum.

If irrigation does not work initially, use a nonprescription wax softener followed by gentle flushing with an ear syringe each night for a week or two.

Sometimes the wax becomes so hard that it simply will not come out despite repeated applications of hydrogen peroxide and irrigation. In this case, it may be necessary to place several drops of mineral oil or ear wax removal drops into the affected canal, wait one day for the wax to soften and repeat the irrigation process.  A cotton ball may be placed in the outer ear to prevent the drops from draining out.

The use of earwax softeners in the ear is not recommended if there is ear pain, cold symptoms, or if the eardrum has ever had a perforation (hole) or tear.

Figure 4. Over-the-counter wax removal systems. This is only one of many that are available. They all do essentially the same thing.

According to the American Academy of Otolaryngology-Head and Neck Surgery, most cases of ear wax blockage respond to home treatments used to soften wax. They suggest that patients try placing a few drops of mineral oil, baby oil, glycerin, or commercial drops in the ear. Detergent drops such as hydrogen peroxide or carbamide peroxide may also aid in the removal of wax.  They can soften the earwax, which can then leave the ear more easily.  It is common to find over-the-counter ear wax removal systems that include a softener and a bulb syringe (Figure 4).

Once the wax is loose and soft, sometimes all that is often needed to remove it from the ear canal is a gentle, warm shower. Direct the water into the ear, then tip your head to let the earwax drain out.

The process of softening cerumen is referred to as cerumenolysis. A review of studies by Clegg and colleagues12 found that topical preparations for the removal of earwax may be better than no treatment, and there may not be much difference between types, including water and olive oil.  However, there were not enough studies to draw firm conclusions, and the evidence on irrigation and manual removal is equivocal.

A variety of softeners have been suggested, including:13

It is worth noting that using plain sterile water, or a sterile saline solution, to soften earwax works just as well as oil or over-the-counter ear drops.  Also, ear syringing is most effective when water, saline, or wax dissolving drops are put in the ear canal 15 to 30 minutes before treatment.

Although a number of softeners are effective, softening may not be sufficient.  In some cases, a cerumenolytic should be used 2–3 times daily for 3–5 days prior to the cerumen extraction.14

Manual removal of earwax is also effective and is most often performed by an otolaryngologist using special miniature instruments (curettes/ear picks), a microscope, and suction.  Manual removal is preferred for narrow ear canals, if the eardrum has a perforation, other methods have failed, or if a person has diabetes or a weakened immune system. 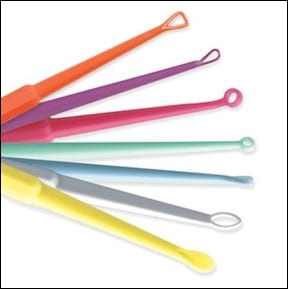 Figure 5. Different types of curettes (disposable in this photo, from SafeEar Curettes).

A curette (Figure 5) method is more likely to be used by otolaryngologists when the ear canal is partially occluded and the material is not adhering to the skin of the ear canal.  The curette physically dislodges the earwax and scoops it out of the ear canal (Figure 6).  A modified curette having a safety stop to prevent deep insertion for self-use is available, but not currently recommended (Figure 7). 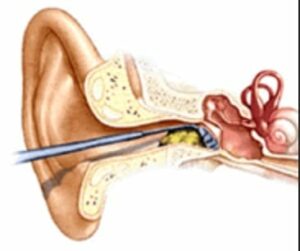 Figure 6. A curette in use. Earwax is loosened and then pulled or scooped from the ear canal (Ear Fix Clinics, UK). 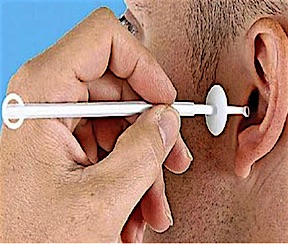 Figure 7. Curette designed for self-use. A barrier is placed on the curette to prevent it from entering more deeply in the ear canal (EarSyringe Co, UK). 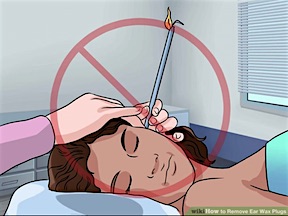 Figure 8. Candling is performed by lighting one end of a hollow candle and placing the other end in the ear canal. The smoke of the candle is said to go down into the ear canal and heat the wax, and then wick it from the canal. This is dangerous and should not be performed. (http://www.wikihow.com/Remove-Ear-Wax-Plugs)

Ear candling (ear coning, thermal-auricular therapy), is an alternative medicine practice claimed to improve general health and well-being by lighting one end of a hollow candle and placing the other end in the ear canal (Figure 8).  According to medical researchers, it is both dangerous and ineffective.15

The American Academy of Otolaryngology states that ear candles are not a safe option for removing ear wax, and that no controlled studies or scientific evidence support their use for ear wax removal.  The Food and Drug Administration has successfully taken several regulatory actions against the sale and distribution of ear candles since 1996, including seizing ear candle products and ordering injunctions.

How to Prevent Excessive Earwax

There are no proven ways to prevent cerumen impaction, but not inserting Q-tips or other objects in the ear canal is strongly advised.  If you are prone to repeated wax, consider seeing your physician every 6 to 12 months for a checkup and routine preventive cleaning.

1The 1832 edition of the American Frugal Housewife.