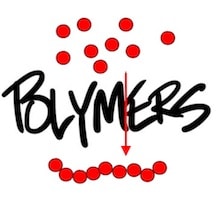 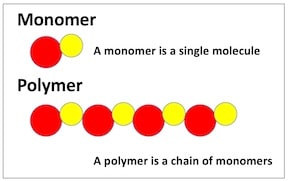 Figure 1. Diagram showing how a string of monomers forms a polymer. A polymer is a large and complex arrangement of monomers1.

Ear impression material is basically a compound (substance formed from two or more elements) with polymer, or a blend of polymers, as the fundamental component in determining the impression material properties.  Affecting the polymer makeup are the type of molecular forces that are applied.  Monomers (one part) are the building blocks that when bonded together (Figure 1), create the more complex organic molecules called polymers (many parts).  A polymer literally means “many units” and is a large molecule constructed from many smaller monomers.  The construction of the polymer can become quite complex, depending on how monomers are applied, and will not be presented here.  This post continues from part 1, part 2, and part 3 on ear impression materials, introducing the start of a transition from ethyl methacrylate to silicone ear impressions.

Any attempts to classify polymers into different categories tend to be somewhat arbitrary2.  Based on the molecular forces applied, a common classification of polymers is shown in Figure 2.  This method of classification has an advantage over others because it is based essentially on the underlying molecular structure of the polymers2.

Figure 2. The most common way of classifying polymers (Young and Lovell, 2011).

Polymer – The fundamental component in determining the impression material properties.  This is a large molecule constructed from many smaller monomers (Figure 1).

Thermoplastics – Often referred to just as plastics.  These become liquid upon the application of heat.  These can be molded and remolded into virtually any shape using processing techniques such as injection molding and extrusion.  As such, they constitute by far the largest proportion of polymers in commercial production2. Hearing aid cases are good examples of thermoplastics.

Elastomers – Elastomers are complex materials based on polymers that have the property of elasticity and resilience, meaning they have the ability to deform substantially by stretching, compression, or torsion, and then return almost to their original shape after removal of the force causing the deformation (James Walker – Elastomer Engineering Guide).  Elastomers can occur naturally, as natural rubber, or produced synthetically, as butyl rubber, neoprene, or other synthetics3.  Ethyl methacrylate used for ear impressions is an elastomer.

The term is derived from elastic polymer, and is often used interchangeably with the term rubber, although the latter is preferred when referring to vulcanizates, meaning that they require vulcanization.  Vulcanization is a chemical process for converting natural rubber or related polymers into more durable materials.  Vehicle tires are good examples where vulcanization is used.

Thermosets – Thermosets are normally rigid materials.  This refers to materials, especially synthetic plastics or resins, that hardens permanently after one application of heat and pressure.  Products made as thermosets are not generally subject to change in shape with heat.

Condensation polymerization – For ear impressions, this has been a two-part system in which the catalyst is in one part while the polymer is in a second part.  Mixing of the two parts causes the curing to take place.

Addition polymerization – Two separate similar sized components are mixed to catalyze the polymers.  The key reaction building polymer is an “addition reaction.”  This development succeeded condensation polymerization, cured more rapidly, and was believed to provide a better impression because of its lower viscosity.

According to Berger4, a silicone impression material was introduced in 1966 that had previously found use by the medical profession.  This was a heat-vulcanized silicone.  No reference was cited.  Berger stated, that at the time of his writing on this topic in 1974, that disagreement continued as to whether the material was more difficult to control and handle, and whether it enabled a better finished product.  However, silicone, an organic compound, like its inorganic ancestor silica, was resistant to heat, cold, chemicals, and weathering, and as such, offered significant advantages for ear impressions.

Silicone is an elastomer (rubber-like material).  It has a history back to 1943 as a joint venture between Corning Glass and Dow Chemical.  It was designed initially to provide better insulating materials for electric motors and generators5.  As the unique properties of this new material wer studied, the potential for broader use followed, and for ear impressions, that year was suggested as being 1966.

In 1969, Lloyd’s Hearing Aids of Illinois, marketed a free pouring liquid silicone for making ear impressions6.  This was a condensation silicone consisting of a somewhat doughy liquid base with a liquid hardening catalyst added, which in a short time in the ear, set up as a hardened ear impression that would hold its shape upon removal.  The free pouring liquid silicone had a short life, probably because of concerns that the liquid impression material could flow past the block and penetrate a perforated eardrum.